The Science Breakthrough that Promises to Reverse Wrinkles

Something amazing happened in the world of science recently and it means doctors might soon be able to reverse the effects of ageing, rather than just repairing them.

According to researchers at the University of Alabama at Birmingham in America, reversing wrinkles could be as simple as switching off the gene responsible for skin ageing. A study in mice showed that wrinkled skin (as well as hair loss and greying hair) could be completely reversed in just a matter of weeks.

The mice were given a drug to induce mitochondrial dysfunction, mimicking what happens as we age. In four weeks, the mice showed grey hair, reduced hair density, hair loss, slowed movements and lethargy. Wrinkled skin was seen in four to eight weeks, and females had more severe skin wrinkles than males.

Incredibly, simply by switching off the mitochondrial dysfunction (by stopping the drugs), all of the symptoms experienced by the mice disappeared. The skin and hair returned to how it had been previously within two months. The mice who had been used in the experiment were indistinguishable from other healthy mice of the same age.

Interestingly, the wrinkled skin showed changes similar to those seen in both natural ageing, and those caused by external factors such as sun exposure and smoking. These changes included an increased number of skin cells, abnormal thickening of the outer layer, dysfunctional hair follicles and increased inflammation. The fact that these effects were reversed means that skin damage of all types could potentially be cured in humans.

The researchers say the “surprising” results of the study will be used to develop drugs for the treatment of ageing-associated skin and hair conditions in humans. Popping a pill to make your wrinkles disappear sounds great but sadly, it’s still likely to be a considerable number of years until these drugs hit the market.

If your skin is showing the effects of ageing now and you don’t want to wait, consider one of these other effective non-invasive treatments.

Injectables can take years off your face by eradicating forehead lines and frown lines, and improving the appearance of crow’s feet around the eyes. It achieves this by paralysing the muscles responsible, giving you a relaxed, smooth brow area. By preventing use of these muscles it also acts as a preventative treatment, meaning wrinkles will not worsen.

A lot of people don’t know that such injectables can also be used to lift the brow. Injections above the eyebrows can give your eyebrows a more defined shape. Meanwhile, the skin above your eyes is lifted to reveal more of your eyelids and make you look younger and more alert.

As we age, our faces lose volume. Our cheeks become more hollow, we develop hollows under our eyes (or bags) and our lips thin. With that loss of fat, the skin becomes looser and starts to wrinkle. Dermal filler can replace that lost fat, restore volume and fill out wrinkles.

Filler can be used to treat marionette lines around the mouth, so-called smoker’s lines around the lips and also around the chin and jaw to correct jowls and enhance definition. Under eye hollows can filled out, while the appearance of under eye bags can be improved by smoothing the transition from the cheek.

Venus Viva is a skin resurfacing treatment that uses nanofractional radiofrequency to heat the cells below the surface of the skin and stimulate the body’s natural collagen production. Boosted collagen causes the skin to tighten, meaning lines and wrinkles become less noticeable.

Venus Viva also helps improve skin quality around the eyes and along the jawline, restoring youthful definition. At the same time, skin blemishes such as acne scars, age spots, redness and enlarged pores are visibly improved. A course of treatments is required.

Ocean Clinic Marbella offers all of the above treatments (and more) in its non-surgical department. Contact us for more information.
Filed under: anti-aging, face 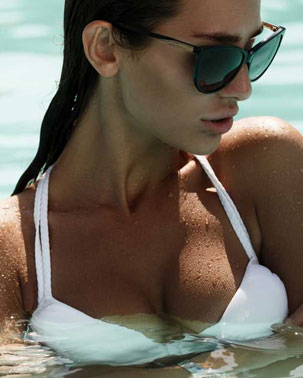 When should I change my breast implants?

Common signs you should change your breast implants or need revisionary surgery. You have been experiencing pain or discomfort due to your implants…