CoolSculpting fat freezing has become one of the hottest trends in nonsurgical fat reduction here at Ocean Clinic in Marbella. CoolSculpting’s popularity has surged due to it being noninvasive, relatively pain-free, affordable, quick and there’s no recovery time needed. Fat freezing also known as CoolSculpting due to the brand that launched the technology. 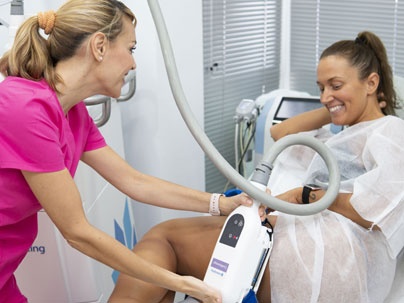 CoolSculpting - how does fat freezing work?

CoolSculpting works using a technique called cryolipolysis (literally meaning cold (cryo) fat (lipo) destruction (lysis)); once fat cells are subjected to freezing temperatures they are destroyed. The body then works naturally to absorb and remove the damaged cells, thus reducing the fat in that area.

CoolSculpting most popular target areas are:

The most common areas treatable with fat freezing are those which have those stubborn deposits of subcutaneous fat that just never seem to go away. As we age it becomes progressively more difficult for us to reduce this type of fat cells, hence the tendency to turn to cosmetic treatments for a little body contouring help.

During the CoolSculpting nonsurgical fat removal treatment, the allocated area is placed in a clamp or between paddles (depending on the equipment) and cooled. The machinery remains in place for between 30 minutes and an hour and 15 minutes depending on the area and fat density. During this time around 25% of the fat cells in the targeted area are destroyed. Multiple applications may be required depending on the size of the area being treated - the belly for example may take between 3-5 applications to achieve full, even fat removal.

The CoolSculpting system is a portable thermoelectric device that applies controlled cooling to the treatment site.

CoolSculpting - how long does it take to see results?

With one round of treatment the average fat removal is between 10%-25%, it is possible that a further round may be desired after the initial treatment has concluded if further removal is required.

CoolSculpting - what are the side effects?

CoolSculpting has a good safety record. Being a non-surgical procedure the side effects are generally minimal. Common post-application symptoms include redness, tingling, swelling and numbness. Occasionally a darkening of the skin in the targeted area may be present immediately after the treatment. There may be mild post-procedure pain but it is not often that medication is needed. All side effects should wear off as the body begins to remove the dead cells.

A very rare side effect (less than 1% of all recorded treatments) is that of paradoxical fat hyperplasia - an increase, rather than decrease, in fat within the treated area.

CoolSculpting - is it for me?

Fat freezing treatment could be right for you if you are close to your desired body weight and suffer with a stubborn, “grab-able” area of fat that exercise and diet are not shifting. CoolSculpting is designed for those with a Body Mass Index (BMI) of 30 or less.

If your main goal is weight loss, then fat freezing is not for you. If there is a targeted region that you would like to remove an area of fat from, then CoolSculpting could be the help you need to remove it.

CoolSculpting - who shouldn’t opt for?

CoolSculpting fat freezing is not for those seeking weight loss, if you are not close to your ideal body weight then fat freezing is not appropriate. It is for isolated, designated pockets of fat that have proven difficult to remove naturally. If you suffer from any of the following then your plastic surgeon may advise against the fat freezing procedure.

CoolSculpting - what are the alternatives?

CoolSculpting fat freezing at Ocean Clinic Marbella adn Madrid: To find out more about this non-surgical treatment, and what we offer, please contact us any time to discuss.