What’s it Like to Have Profiloplasty (Rhinoplasty and a Chin Implant)? 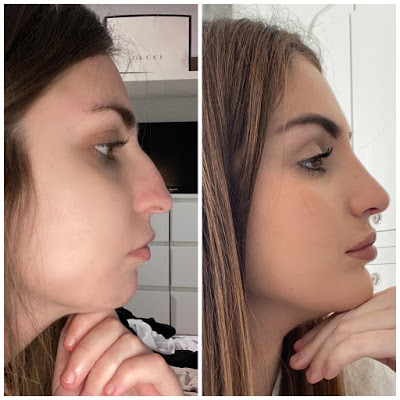 Profiloplasty aims to balance the profile of someone’s face by making sure the forehead, nose, cheekbones and chin are all in proportion.

We asked Mai about her experience…

What did you want to change about your face?

I always wanted my nose done since I was about 13. It was a very big insecurity. I’d had quite a few consultations before, but they would show you pictures and all the noses looked the same and quite fake. The most important thing for me was to keep my face natural. I wanted a nose to suit my face because I’ve got big eyes and my mouth is quite big.

When I started working at Ocean Clinic, I saw the patients that Kai had operated on and I just knew that I was going to get it done with him. He keeps it so natural and he does exactly what you asked for.

Did you have a clear idea of what needed to be done?

I actually said to Kai, “I need the lump filing down and my tip lifting up but I don’t know if I need it bigger, smaller or anything.” Kai put a mirror in front of me and said, “What we need to do is lift the tip.” I didn’t get my nostrils cut, I only got the middle cut because he said that would keep it a nice shape on my face, to keep the nostrils where they were.

He said he would file my nose down but he didn’t want to give me a ski slope so he would keep it straight to suit my face. It would keep it natural. And then he said a small chin implant would look good because it would bring my features forward. It would make my face look slimmer and the profile would be perfect.

I’d had filler in my chin before and it was good but I needed a more permanent result. I didn’t even know chin implants existed until Kai said he was going to do it for me. He took the fat out of my double chin as well. Now my profile is perfect, as in it’s all the same level, but I still look like me. 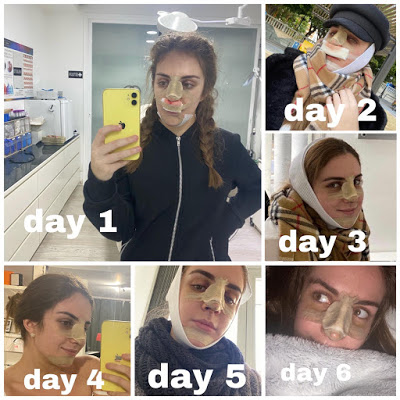 How was your experience of the surgery?

I was quite nervous the night before. I was still nervous in the morning but the team were always with me - I wasn’t on my own a lot. It was all over very quickly. I went down to theatre, they did the anesthesia and I woke up.

It was quite sore when I woke up but they gave me some painkillers and it was fine after that. I went up to my room and they looked after me perfectly. I’m staff but they treated me like an actual patient - I got exactly the same treatment as everyone else.

The first day, you feel bunged up and quite tired, but my nose didn’t hurt. It only hurt when I got the stents pulled out my nose; it was a weird kind of pressure. My chin hurt a bit more, it was a bit tender. And under my neck where they cut the fat out it was a bit sensitive because it was bruised. It was like when you go to the gym and you get painful muscles, that’s all it felt like. Overall, I didn’t have a lot of pain and I stopped taking painkillers after two days.

Did you have open or closed rhinoplasty?

It was an open rhinoplasty. They broke both sides of the nose and the top. They cut my columella and pulled it up. I had stitches and black eyes but they only lasted for five days. I had my operation on a Tuesday, Wednesday I was at home and then Thursday I was back at work.

Where was the incision for your chin implant made?

Below my chin, just where your double chin is. You can’t see it. It’s so, so, fine. They don’t stitch it up outwards, so you don’t have little knots. What they do is stitch it inside and use dissolvable stitches. The scar is literally as fine as a thread. I’ve sunbathed, had no makeup on and no one can tell.

And what about the scar at the base of your nose?

You can’t see it at all, there’s nothing. I do heal well but there was a boy who had his rhino done last week and I’ve been speaking to him every day. And he’s just got his stitches out and he can’t even see the scar.

Can you feel the implant in your chin?

At first I thought I could feel it. I think it’s psychological. It was really tender so I kept on thinking if I touched my face I might move it. But it’s in there with screws and it’s a material that ends up fusing to your bone. I can’t feel it anymore. Now my face just feels like it did before.

How long was it before you could see the results of your surgery?

It’s 10 days before you can go back and have the cast off. I decided to keep stickers on my nose for a bit longer but that was my choice. I saw the changes straight away, I think because I was so conscious of my nose.

I started to see proper results when the swelling went down - on my chin after two weeks and my nose after three weeks. Now it’s coming up to month three and I can really see the results.

How do you feel about your new profile?

Very confident. I’m a different person, I’m just really happy. I know it sounds silly, but it does actually change your life because I wouldn’t get in any family pictures before. I wouldn’t get in any photos with my friends if it wasn’t on my phone. I had to always do contouring on my nose, I was just obsessed and now I don’t even wear makeup. I went to a party the other day, everyone was taking pictures and I was just really laid back and really confident.

What do your friends and family think about it?

Everyone was scared that I wasn’t going to look like me. They’ve seen nose jobs online and the only ones that come up are the fake-looking ones. But everyone was really happy with it, even my dad, who doesn’t really agree with getting anything done. They all think I still look like me, but a more feminine, petite version of me.

What would you say to anybody who’s thinking about having this kind of surgery but worried about taking the plunge?

I would say it’s the best thing I’ve ever done. My thought is, why didn’t I get it done before? I wish I had gotten it done before with Kai, maybe two, three years ago. Everyone who has had it done with Kai who I’ve spoken to - because I’ve spoken to his rhinoplasty patients - always says the same. They’re so happy to finally have it done. You build it up inside but once you have it done, there’s no looking back. It’s the best decision I’ve made.

If you’re interested to find out more about profiloplasty, contact Ocean Clinic for further information or a free consultation.